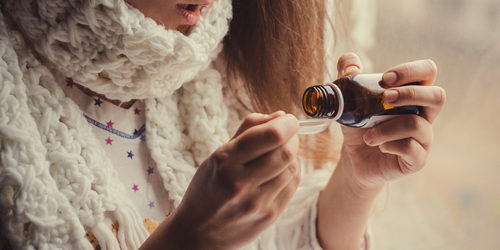 Three days after the death of rapper Mac Miller from a drug overdose, another rapper, Bow Wow, confessed to being addicted to a combination of promethazine and codeine-based cough syrup that he would mix with soft drinks. In 2007 when he would collaborate with rapper Omarion for the album Face Off, family and friends would turn on him for his addiction as he would abuse cough syrup multiple time. When he stopped during his Cincinnati tour with Chris Brown, he suffered withdrawal symptoms, passed out, and was sent to the hospital. He has since stopped and engaged youth on Twitter not to suffer an early death from drug addiction.

According to StopMedicineAbuse.org, 1 in 30 teens abuse cough syrup. They are after the ingredient DXM (dextromethorphan) which was introduced in the 1950s and is a common cold suppressant. DXM is in more than 125 drugs for cough, flu, and cold medications like Nyquil and Delsym. Many rap stars have publicly said that they have been addicted to cough syrup as they call it “sizzup.” They talk about mixing cough syrup with soda or candy to get rid of the bitter taste. Many have been hospitalized as a result of their addiction. This medication is safe when you take the recommended doses on the label as it affects the region of your brain that controls coughing. You can typically take 10 mg to 20 mg doses every four to six hours or 30 mg every six to eight hours. If you take ten to fifty times the suggested amount, you could experience hallucinatory and dissociative effects.

Many teens abuse these drugs for many reasons such as it is easy to acquire. Common cold medications are legal so there is no age limit when buying certain ones. If you do not have any, the chances are that you neighbors, friends, or relatives will have them in their bathroom for you to steal. It is easy to get higher dose tablets like Coricidin or Walgreens Flu BP. They are much cheaper to buy compared to buying illicit drugs from a drug dealer. Teens also feel more comfortable trying a legal brand name that they have heard before and it is legal to carry around. Parents, unfortunately, are not aware of the serious side effects that the medication could have. They may feel that if their kids are depend on anything, it is better if it is something legal and safer compared to illicit drugs.

DXM can be sold in bulk outside of the U.S. and is resold in smaller doses by drug dealers. Cough syrup can also be used as a gateway drug to more illicit drugs when teens graduate high school. They may feel like taking excessive doses of cough syrup is beneath them and can get a rapid high from one hit of an illegal drug. The effects that cough syrup can have includes impaired vision, sweating, fever, rapid breathing, increased heart rate and blood pressure, nausea, vomiting, impaired judgment, memory loss, hallucinations, and can be put in a coma. This addiction can result in overdoses as the central nervous system shuts down as well as can cause liver damage, heart attack, stroke, and death. It is also possible to injure yourself when you are high as your consciousness is altered, impaired vision and hallucinations which can lead to irrational and dangerous behavior. When you combine cough syrup with illicit drugs like ecstacy could come with fatal results.

If your child becomes unresponsive, is vomiting, sweating, pale face, and develops fast, slow, or irregular pulse, you need to get your child emergency medical attention. As a parent, it is important for you to understand that just because something is legal does not mean it is always safe to use in excessive amounts. To protect your kids from developing a cough syrup addiction, clean out your medicine cabinet and keep an eye on the amount of medicine that is in the bottle or package. If you child has a cold and they need medicine, give them the doctor prescribed dose and supervise them as they take the medication. Do not buy more over the counter medications for the purpose of stocking up as it will make it easier for kids to get hold of them. Lock up the medication in a storage cabinet to prevent your children from getting their hands on it.

You should be aware of what your kids look up online and the amount of time spent as certain websites might have their own education promoting DXM abuse and how to achieve certain levels of high. Check the kind of people that your child hangs out with. See if their parents are aware of any medications that are missing from their medicine cabinets and aware of the dangers their child can face from cough syrup abuse.

You also need to educate your children on the dangerous effects that too much cough syrup can have on them. Read them the label of all of the risks that come and different celebrities that they admire who have had bad things happen to them as a result of their addiction like Bow Wow. By educating and keeping these medications out of reach from children unless they are suffering from a cold, you can be saving their life and will prevent them from wanting to experiment with illicit drugs as well.