MDMA Can Help PTSD But Still Poses Risk of Addiction 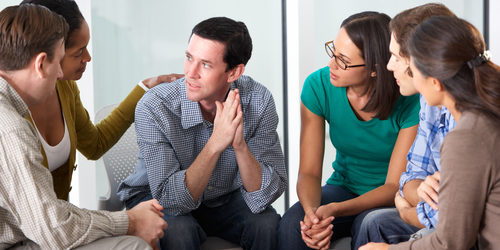 MDMA is a psychoactive drug known for recreational use and at parties or clubs that make you feel euphoria, heightened senses and empathy. People with PTSD are under the risk of addiction and mental illness when they cannot get their memories under control. A recent study shows that MDMA has the potential to help those with PTSD but can still pose a risk of addiction.

Results of the Study

MAPS Public Benefit Corporation did a study with people suffering from PTSD who said that MDMA helped them. It can catalyze the therapeutic processing of traumatic memories and relieve PTSD symptoms. Users have said that MDMA can reduce fear by giving you feelings of trust and well-being. This would allow patients to reexamine their traumatic memories but only taken a month at a time combined with therapy. The FDA is still debating whether or not to approve MDMA for PTSD. Researcher for the study, Alli Feduccia, thinks that the drug could be approved by 2021.

The study included 22 veterans, three firefighters, and one police officer who all had PTSD and were given three doses of MDMA, 23% of which had tried the drug before. The participants had three sessions of psychotherapy to prepare for the drug. After the first dose, the participants stayed overnight and were followed by the phone for a week. Then, they were given three more sessions. One month later, the high dose group reported having met the criteria for PTSD more compared to the low dose group. The side effects of the experiment included anxiety, headaches, fatigue, muscle tension, and insomnia. Some reported thoughts of suicide and another who attempted suicide before was admitted to the hospital. Another month later, there were one to two additional MDMA sessions with three psychotherapy sessions to follow.

What Lasting Results Were Seen?

One year later, sixteen reported to have no PTSD, but two people had a new diagnosis of PTSD. There were also twelve patients that were taking other medications. It may have been proven to help with PTSD therapy, but it is still hard to tell if the drug will work long-term with PTSD patients, as there is still the risk of addiction. The larger phase three trials of 200-300 people is scheduled to begin sometime in May. It is important that PTSD patients do not try this experiment at home with MDMA as you should be under the supervision of a doctor to reduce the risk of addiction.

If You Struggle With Addiction, Choose Bayview