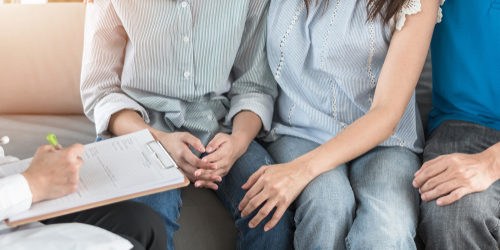 It can be hard to be in a relationship when two people struggle with addiction. The chances of getting help decrease if your significant other is constantly around you abusing drugs. One real-life couple shared their story to Huffington Post about the obstacles they both faced in their relationship as a result of their drug addiction and how they got through it.

Ben’s problems with drug addiction started when he was almost 15. He began using meth and cocaine initially on the weekends which then escalated to every day of the year. He would use when school would start, morning break, lunch, and leave school early to smoke more. Ben would engage in illegal activities like robbing people who used drugs, assaults, and minor thefts. When Ben had his first date with Jessica, he was honest with her about everything including leaving school in the tenth grade. Even though he repeatedly asked her if she wanted to stay away from him after hearing about all of that information, she stayed with him. Jessica figured that she can either change him or that things will be different between them despite how hard it was to be clean from meth.

Ben relapsed in 2012 when he was visiting friends from out of town. He told Jessica that this was a one time thing and would never use again. Unfortunately, Ben used drugs again when Jessica was pregnant with her daughter in 2013 and would continue for five months. Things became tense between Ben and Jessica when they would have constant fights about money since Ben was a big spender despite being in the process of buying a house. When Jessica would have false contractions as a result of the stress brought on from Ben’s substance abuse, she would be in the hospital alone since Ben did not pick up the phone. Jessica would pretend that everything was okay on Facebook by talking about the joys of her pregnancy to avoid anyone finding out the conflicts between her and Ben.

Ben would continue to apologize to Jessica about all of the problems he caused but would use excuses like how being a new parent is stressing him out or that Jessica is being too needy towards him. When Jessica would try to talk to Ben about his change of appearance and how she wanted to help him, Ben would say that these new changes were a result of him working all the time. Luckily, Jessica’s fears that Ben would not be present for the birth of his baby did not come true as he was there the night before their daughter, Scarlet, was born but was gone after. One month after Scarlet was born, Jessica told Ben that he needed to go to rehab and he listened. He returned home Christmas of 2013 and him and Jessica got married in August 2014.

While Ben’s problems were starting to disappear, Jessica’s was beginning. Ben and Jessica would have nights of drinking together after coming home from work without realizing that Ben’s drinking was a gateway to drugs. They would continue to have fights about finances, their kids including two kids from previous relationships, and other responsibilities. Jessica was starting to drink too much and felt it was deserved to payback Ben for the problems his drug addiction caused in 2013. Jessica kicked Ben out of the house and they separated for several months. Ben got an apartment and relapsed during the separation. He once woke up by a rest stop pull out with two dogs, no money, no food, and no drugs. He knew that he hit rock bottom and needed more help after Jessica picked him up from the rest stop.

Jessica, on the other hand, had problems of her own. She went to a concert with friends and drank a lot of alcohol that night. She was cornered in a hotel room by a man who believed she knew someone who owed him money. She did not make it home in time so Ben had to tell the babysitter to go home. Ben decided to go to Alcoholics Anonymous since Narcotics Anonymous meetings were not working out for him. Jessica would go with him for moral support until she was able to relate to the stories that people were sharing. After hearing people say that they felt like they were being controlled by alcohol, she realized that she was an alcoholic too. Ben did not even realize that Jessica had a problem with alcohol since he was too absorbed in his own problems.

Ben and Jessica would attend Alcoholics Anonymous meetings every week. Jessica still continues to speak to her sponsor and connect with others who dealt with the same struggles as her through social media and her own blog. Ben does not go to meetings anymore but has been sober for three years and spends time with people supportive of his recovery. Ben and Jessica are still together today. The advice that Ben and Jessica gave to others is not to be codependent with your significant other where big fights lead to an excuse to substance abuse. Jessica says that it is important to practice forgiveness to help you move forward in your relationship. Ben and Jessica may have had a rocky relationship but they eventually found the strength to work through their drug addictions to grow stronger as a couple.

Located in Tacoma, Washington, Bayview Center’s mission is to offer clinically-driven programs and services to treat a number of substance abuse disorders along with anxiety and depression using cognitive behavioral therapy, dialectical behavioral therapy, trauma therapy, yoga therapy, and more for a successful recovery. For more information, please call us 1-888-570-7154 at as we are open 24 hours a day, 7 days a week.

Hallucinogens Effects on the Brain
October 9, 2020

The Risks of Self-Medicating
October 6, 2020